So at the beginning of last month, Owen Jones and his left-wing loonie followers marched in London to counter-demonstrate UKIP and Tommy Robinson’s ‘Brexit Betrayal’ march, with Jones’ counter-demonstration being a march ‘Against fascism’ and an aim to get ‘Racists of our Streets’. Straight away there’s a problem, because neither UKIP or Tommy Robinson are fascist or racist. Of course both the former and the latter have coherently different political opinions to Owen Jones, but that hardly makes Robinson or the UKIP party white supremacist thugs.

After personally following Owen Jones for a few years since I read one of his books, I have noticed that he ‘over uses’ the fascist and racist label. It seems that anyone who disagrees with him is a bigot in his opinion. This has always irritated me because ‘fascism’ is a powerful concept. Fascism means pure hatred, only the worst of satanic people identify themselves as fascists, yet it seems that Owen Jones thinks anyone ‘right of centre’ is a fascist.

I finally snapped when I found out Jones was organising this anti-fascist counter-demonstration so I sent him a rather lengthy email. I criticised Jones’ ‘fascist labelling of Tommy Robinson’ and I asked him to meet me and personally debate me. I sent the email in a positive tone being as polite as possible despite how annoyed with Owen I was, because I assumed that this was the best way in which to first get a response, and then further healthy discourse between the two of us.

Hi Owen,
Hope you are well and are having a nice weekend.
My name is Jack Mitchell, I am a freelance writer, I run my own blog and I have been studying Islam in my spare time since I graduated with a politics degree in 2016. I have been following you closely for a while now after I read your book ‘The Establishment’, and whilst our opinions may differ with great significance; I do appreciate the quality of your writing.
The reason I am contacting you is because lately on Twitter you have been frustrating and angering me quite a lot. I understand tomorrow you are organising a march against fascism and Tommy Robinson, but that doesn’t make sense to me because the former and latter contradict eachother. I would happily  join you on a march against fascism, but I am a Tommy Robinson supporter, so where does that leave me?
Tommy Robinson is not a fascist. The more I see you on Twitter the more I see you using the fascist label inappropiately and it is really frustrating. Fascism is a powerful word, and an important one to me personally because my Grandad (who was an immigrant btw) fought in WW2 to help defeat the Nazi fascists. That’s what fascism means; people who are Nazis, people who committ mass murder of people because they are of a different race and/or religion
When I see you on Twitter labelling people as fascist far too easily, it makes me look at the photo of my Grandad on the wall next to his war medal and I think “what was the point in my Grandad risking his life fighting fascism if people like Owen Jones are today going to label anyone centre of right a fascist?” My Grandad fought to stop actual fascists, not people like Tommy Robinson.
Listen, there is a 5000 word article I wrote on my blog last year, jackmitchellpolitics.com, explaining why Tommy Robinson is not a fascist. It would be fantastic if you could read that. All he has ever done is speak out against Islam, which is itself a fascist political ideology in my opinion. However, I do not want us to debate our opposing opinions via email.
So lets meet! I would love to meet you for a coffee Owen and we can discuss Tommy Robinson, Islam and any other political matter where our opinions vary. If you are up for that my phone number is+*********274 or contact me via this email (j**********@gmail.com).
I look forward to your reply, and I hope the demonstration goes well tomorrow even though I oppose what its about.
Kind regards”
Of course Owen Jones did not reply!
Therefore afterwards I started to chase him up and I made sure I reminded him of my email on every single tweet he wrote on Twitter, by replying to his tweets with screenshots of my email.

I carried on this tactic for about 3 weeks. Every single tweet Owen wrote I would reply with the same message and screenshots of my email. Either he never noticed my comments on his tweets, or he just blatantly ignored them, however I did enjoy some tasty debates with Owen Jones’ supporters and followers on Twitter. My favourite moment was when a transgender lad/lass referred to me as a ‘hills have eyes Nazi freak’… 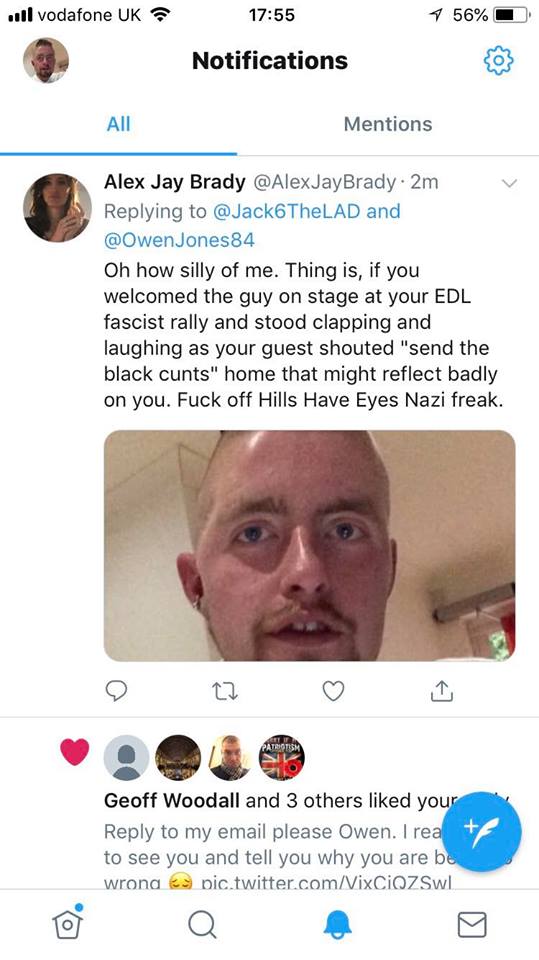 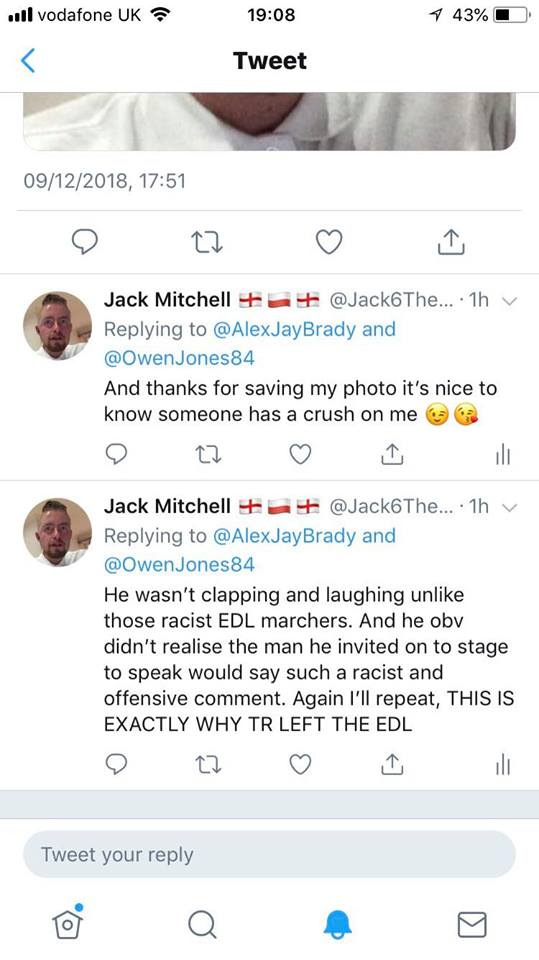 And then finally after 3 weeks of persistent nagging of Owen Jones to reply to my email, I came across this on Twitter… 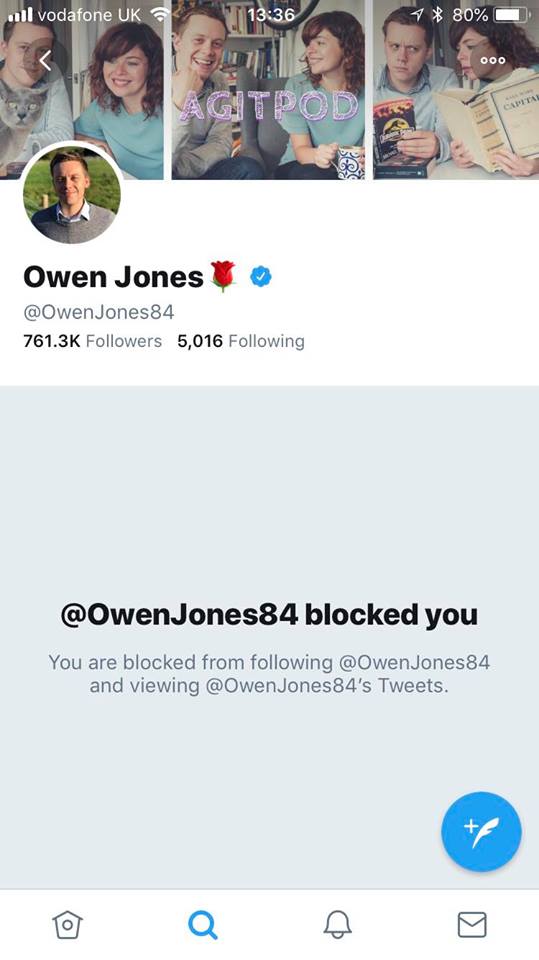 No I never seriously expected Owen Jones to meet me for coffee and discuss our contrasting opinions on Tommy Robinson and Islam. But I did at least expect a reply to my email, and if I wasn’t going to get that, then perhaps maybe some sort of recognition of the dozens of times I chased him up on Twitter seeking a reply. But no, absolutely nothing from Owen Jones what so ever. 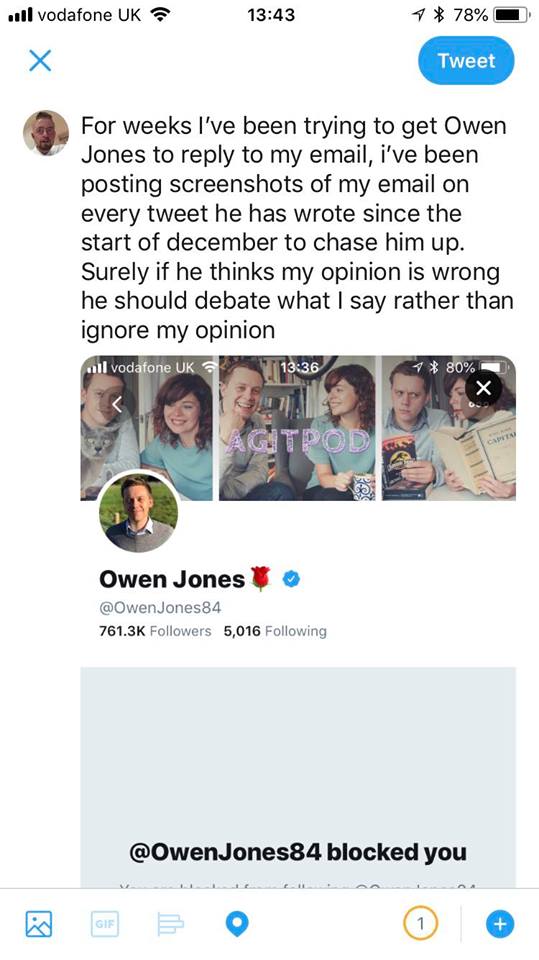 In a democracy people with contrasting opinions discuss and debate. Of course democracy also means you can ignore other opinions, but that in my opinion is cowardly and soft. It makes you a weak loser.
This is why I take victory in the fact that Owen Jones blocked me without acknowledging what I had said to him. I suppose its best for me to assume that he did so because he didn’t want to admit that I was right and he was wrong.
Silencing people with different opinions is generally a tactic of Owen Jones and people on the left, that is why people at the Jones’ counter-demonstration my email was in relation to called for Tommy Robinson to be banned from talking. You can imagine who those people stereo-typically were at the counter-demonstration; white middle-class feminist snobs who need Britain to remain in the EU so that migrants working in Pret a Manger can carry on serving them coffee on their way to work in London.
I like to think I was mature regarding the way in which I went about emailing Owen Jones and seeking his attention. I should never have expected the same from him however, the video below proving how much of an immature brat he is…
https://www.youtube.com/watch?v=w-fWhymsJsw
Owen Jones is a childish cry baby who throws tantrums when people have a different opinion. He tries to silence people who have contrasting opinions, proven by how he has acted with regards to my approach and his personal vendetta against Tommy Robinson. Unfortunately in our politically correct society, loonies like him get more of a public platform than those people with common-sense.
What would make me angry is if I find out he replied to my tweets or acknowledged them after he had blocked me so that I would never be able to see so. He could make me out to be a complete mug to his 761,500 followers but I would never know. That would be a completely cowardly thing to do… so I wouldn’t be surprised if he has already done exactly that.