Right now ‘the rest of the world’ must think our once great country is an absolute joke. ‘Gone soft’ is the perfect phrase to use. Aside from the fact that people are getting stabbed up on a daily basis in the former English capital city of London, you have known jihadis claiming state benefits, LGBT rights being shoved down 4 year old children’s throats with the importance of transgenderism being on the primary school National Curriculum, and convicted child rapists from the nation wide grooming gangs receiving millions of pound in legal aid.

But look at what has happened to one of our country’s greatest modern day heroes; ‘the Lion of London Bridge’ Roy Larner.

Everyone knows what happened that night on London Bridge, but just to remind everyone, 3 cowardly Islamists who were ‘striving for Allah’, jumped out of a van and starting stabbing and slashing innocent people with their knives; replicating the actions of their great Prophet Muhammad 1387-1397 years ago. 8 people were killed that night by those 3 murdering fascists and 40 more were injured, but that number would have been higher if it wasn’t for the heroic actions of Roy Larner. 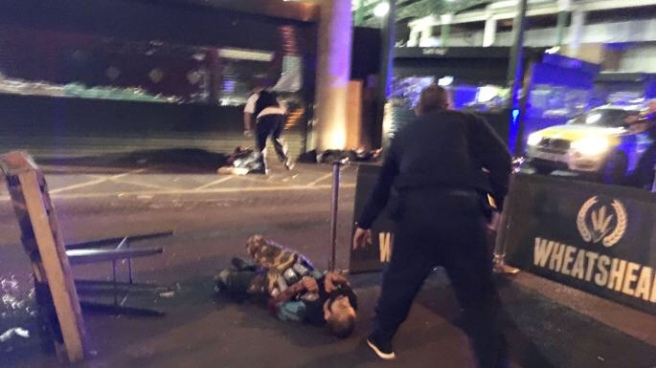 Roy took them on himself with his bare hands shouting “fuck you i’m Millwall”, resulting in him in receiving 8 slash wounds to his head, neck and arms.

There were calls for Roy to receive some sort of award, some sort of medal maybe even a knighthood following his bravery, but 2 years later now that the authorities believe the euphoria over Roy Larner actions have faded away, our Government have decided to put ‘the Lion of London Bridge’ on the Anti-terror watchlist.

This is an absolute farce. Roy stood up to knife wielders to try and protect the strangers around him, and now the State feels he is the one that needs to be watched. He may even have to have de-radicalisation classes. Diabolical.

The reason him being placed on this watchlist was supposedly because far-right anti-Islam activists tried to contact Mr Larner. Why they contacted him is not known and the relevance of the fact that they were far-right anti-Islam is questionable. Perhaps in fact there is no need to politically define the people who did try to contact him, maybe they just wanted to give their admiration and say thank you for his courage that night, as would most people.

The fact is, either way there is completely no need to make an example of Roy Larner and treat him like he is a danger to society.

“They treat me like a terrorist but i’m not political at all” Roy said.

On top of that in case you thought this storyline couldn’t be more ridiculous, Roy Larner was denied compensation by the Criminal Injuries Compensation Authority due to his criminal record.

Roy, who currently sleeps on his mate’s sofa, needed that money to get his life back on track following that terror attack on London Bridge which left him with PTSD and anxiety along with the long-term injuries to his head, neck and arm.

I hope Roy Larner appeals and I hope he is successful. It is the very least he deserves.

As for this country, absolute madness. One person stands up to terrorism and now they are the person that needs to be watched.

This summarises the mindset of contemporary British society, people scared to speak out against the actual problem of Islamism and the danger to a Western free-world that comes with Islamisation, and instead it is simply easier to blame the man that thought back. Bonkers Britain